How do you know if people understand a change initiative?

I was talking with someone who was going through a large change at her organization. She described the communication materials that had been developed to build awareness about the change. It was important to explain why the change was necessary and what was going to be new for employees.


I asked, "Did people understand the communication?" She said, "Yes." I then asked, "How do you know?" 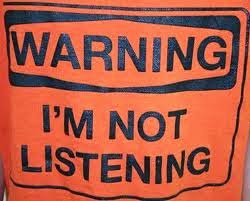 Often, project teams focus their efforts on building and executing change plans without thinking about how they will test if their activities achieved what they were intended to do.

For this project, checking online access to presentations would confirm if people actually viewed the communication. Also, asking a few people about what they learned would provide a proxy for levels of awareness. A couple of simple questions such as "Why are we making the change?" and "What is the change about?" is all that is needed.

Not investing in validating understanding can have disastrous consequences such as people not adopting new ways of working because they don't make sense or not knowing the benefits that the change will provide and therefore not ensuring they are realized.

One of the biggest mistakes I made in my career was not confirming that a supplier had trained its people on how a large systems change would alter processes.

We had developed a rock solid validation plan for all colleagues but neglected to include employees from third-party providers who were acting on the behalf of the company.

I had asked the transition lead for this group if the training had been successfully delivered. The person said yes and I left it at that. Most of the training had not been shared with the company. Like most mistakes made during big changes, mine cost time, money and credibility. This was a lesson I have not had to learn twice.

Here are some tips on how to assess what people know about a change and their role in making it successful:
It is easy to assume that people understand what you have communicated to them, especially when you are working on the project and know the details by heart. Testing your assumptions about what people know is one of the best ways to manage risk and avoid surprises.

How do you know if people understand a change initiative? Ask them.

Phil
Posted by Phil Buckley at 08:10 No comments:

How to Lead Change in a Unionized Environment

I met Jamie Gruman, Associate Professor of Organizational Behaviour, University of Guelph last week for coffee. We talked about current trends in change management and where our field is headed.

Jamie mentioned that his Leadership of Organizational Change Masters program class was discussing how to lead change within a unionized environment. We thought this would make a good blog post.

I worked within a unionized environment at Cadbury in Canada. Management and the union had good relations and I don’t recall any union-specific challenges to the merger and cultural initiatives we implemented.

I remember a warehouse manager saying he preferred to work with unions because the rules of engagement are clear and in writing. He also said that you get the union you deserve, meaning that good relationships breed good partnerships (and vice versa).

Union leadership is a stakeholder group just like all others that are impacted by change and have influence over the direction, evaluation and ultimately the success of it. You need to engage and motivate these key players as you would anyone else. This will ensure they visibly support the change and drive the behaviours that enable it, demonstrating them to their membership.

The first thing to do is assess how the change will impact union leadership and what role you need them to play:


Here are some tips on how to align union leadership with your change initiative: 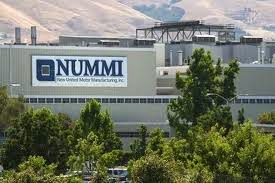 An excellent example of management and union partnership through change was in 1984 when Toyota and General Motors created a joint venture called New United Motor Manufacturing Inc. (NUMMI) that transformed an ailing GM factory in Fremont, California, into a highly efficient producer of cars.

Within one year, the ailing plant went from GM’s worst-quality producer to its highest. Labour relations followed a similar transformation. Employees and their union embraced the Toyota production system built on mutual trust and empowerment. Absenteeism dropped from 20% to 2%.

So how do you lead change in a unionized environment? The same way you do in a non-unionized one except for the acknowledgement, engagement and motivation of another key stakeholder that can influence the success of the change. This is an important step that is sometimes missed.

Phil
Posted by Phil Buckley at 22:44 No comments:

On May 4th, I will be running my third marathon. My first was in October 2011 and second in May 2012. I had satisfied my marathon thirst and said that I would only run another one if Barb wanted to run her second. Last September, she became thirsty.


Running is a great sport. For those who have a competitive spirit, the goal is continuous improvement and the measure is to beat your personal best time. When you do, the feeling is tremendous.

I ran my first marathon when I was writing the first draft of Change with Confidence. Running 26.2 miles. Twice the distance of my longest run seemed like an appropriate stretch goal.

I created a detailed training plan and stuck to it. My big mistake was exceeding it, which gave me shin splints four weeks before the race. I could barely run for two and a half weeks.

The run was tough. My legs started cramping around 9 miles in and they seized at the 15 mile mark. I had experienced slight cramping in my longest training runs, but nothing like this. I got to the finish line but far later than I had planned.


Two days after the race, I started planning my second marathon that was six months away. This time I was joined by my wife Barb and friend Tim. I learned from my mistake and kept to my training plan. At the starting line I was injury free and confident about my performance.

I followed my race plan, running '10 and 1' intervals and not starting too quickly. To my surprise and horror, my legs started to spasm at the same distances. I relived the progressive decline of my legs, just like watching a movie for the second time - a scary one.

The good news is that I finished the marathon and beat my first marathon time by over 21 minutes.


This time around, I have completely overhauled how I run and train. I have been:

With 23 days to go, my practise races are a little slower than two years ago, but my form is better. This will be a good test of Marshal Goldsmith's adage, "What got you here won't get you there." The "there" for me is a faster time and stronger legs throughout the race. Either of them will be an improvement and both will be tremendous.

Posted by Phil Buckley at 07:53 No comments:

Email ThisBlogThis!Share to TwitterShare to FacebookShare to Pinterest
Labels: change, change management, change with confidence, continuous improvement, phil buckley, Toronto Goodlife Fitness Marathon, What Got You Here Won't Get You There

How Change Management is Changing 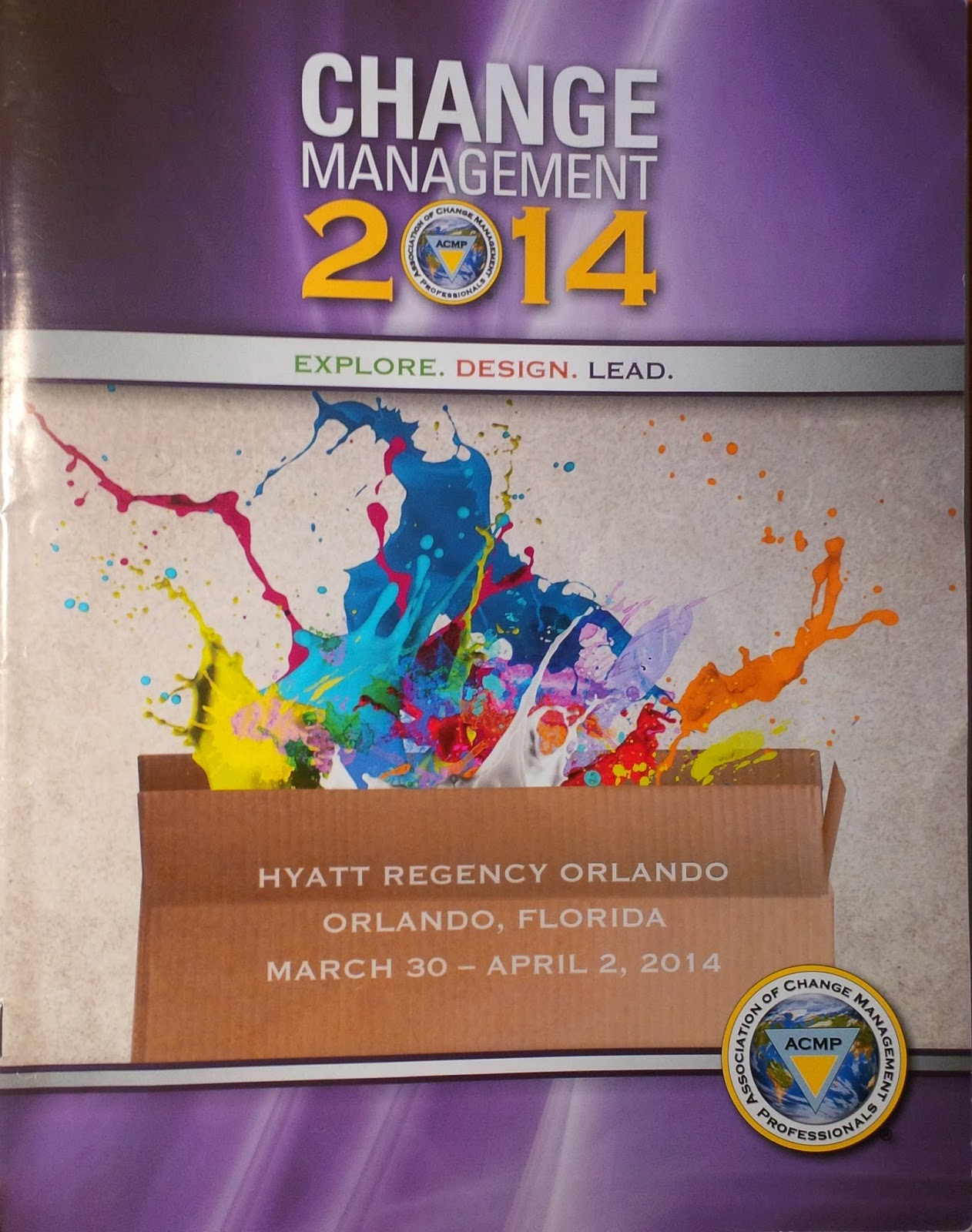 This week I went to the global Association of Change Management Professionals (ACMP) Conference in Orlando. I had attended last year's conference just after the launch of Change with Confidence.

The two conferences are like bookends to a great year. I have never done more public speaking, writing, and consulting. I also have learned a lot about publishing, business ownership and what makes me tick. It's been a good year.

When I returned home, I reread my blog post about last year's conference to see if my interests had changed. 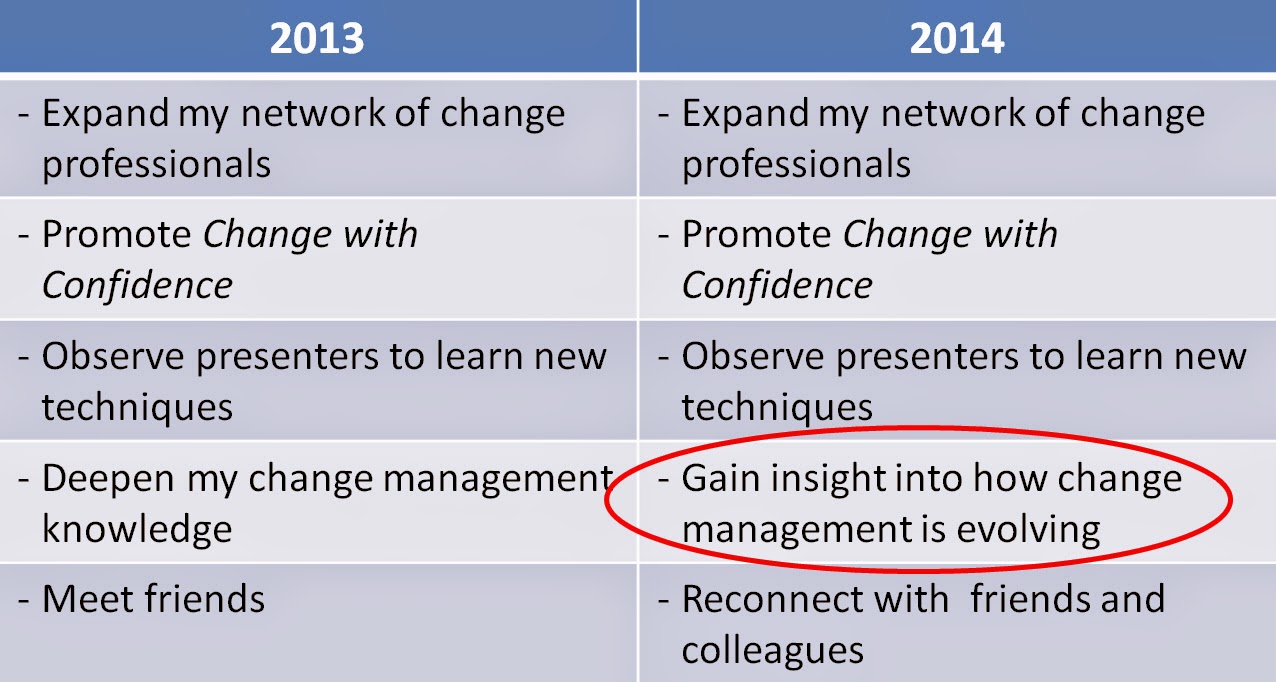 My objectives were similar with one exception: This year, I was keen to get clarity on how the profession is changing. I wanted to see if others were noticing a growing demand for strategic leader support beyond developing independent change projects.


My new objective affected my choice of sessions, the questions I asked, and the conversations I had. There were many views on where our profession needs to go.

There is a growing need to help leaders navigate their constantly changing environments and constantly reinvent their organizations to compete.

Two themes emerged over the week: How to effectively manage the ever-growing portfolio of changes that are needed to succeed and how to build resilience and agility capabilities into the mindsets, processes, and culture that shape how work gets done.

I left the conference with more questions than answers about the future of change management. Bill Taylor, one of the keynote speakers, had the best question of all: Are you learning as fast as the world is changing?

Phil
Posted by Phil Buckley at 20:44 No comments: