The Only Entrance Requirement is Interest 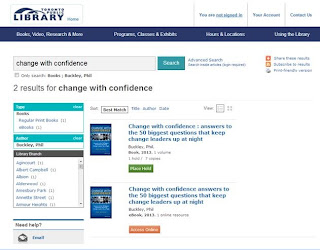 My sister-in-law, Ellen, sent me a text saying that Change with Confidence had been purchased by the Toronto Public Library system. Seven hard copies and one e-copy were catalogued in their on-line database, and the e-copy had already been reserved!

This is big news to me. A library bought my book. More people will now be reading it. I wrote a library book. Like other milestones, I thought, "This is a real book."

I am nostalgic about libraries. I remember as a boy signing-out books for school projects. As an adult, I searching through research manuals for publishers to pitch. I had a purpose and the library enabled me to accomplish it.

Who will be using my book and how it will be used? Will people take notes, reference quotes, write in the margins or maybe even rip out pages instead of copying them (the horror)? Will someone owe fines for keeping my book past its due date?

Mostly, I think about my book reaching a new audience. People with their own purposes using my book for free. Lady Bird Johnson said, "Perhaps no place in any community is so totally democratic as the town library. The only entrance requirement is interest."

Like most great opportunities, I am thinking about how to scale it. If one library system is interested in Change with Confidence, how do I engage others who may feel similarly. I have to believe there is lots of interest.

One Thing Leads to Another, and Another... 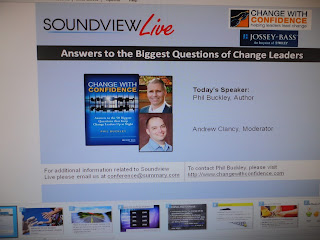 On June 6th, I gave a webinar about the biggest questions of change. It was sponsored by Soundview, a company that provides professionals with business intelligence in time-efficient ways. It offers business book summaries, author webinars, and video interviews to build awareness and skills on the latest business thinking.

A webinar is an on line seminar where participants hear your voice and watch your slides on screen. They also have the ability to ask questions and leave comments. There are both benefits and challenges to this presentation format.

On the benefits side, you are presenting in a controlled environment with the freedom to review your notes and pace your talk. Also, it is easier to answer questions and discuss comments because the moderator frames and sequences them. Another benefit is that you are not distracted by the participants because their phones are muted and they are invisible, which is helpful, especially when the audience is in the hundreds, like this one. 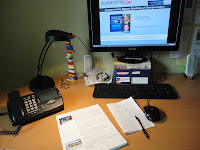 On the challenges side, you are talking into a speaker phone for forty-five minutes non-stop. Your voice needs to modulate to make points and create excitement so that people stay engaged.

My friend, Michael, who is an excellent speaker, suggested I adopt a conversational tone. He also suggested that I ask people to reflect on my points and invite them to consider their relevance based on what they were experiencing.  Both tips were helpful and made my talk sound more personal. It felt like a conversation every time I posed a question to participants.

It's always helpful to be a member of a great team. Ursula, the executive producer, and Andrew, the moderator, were incredibly helpful. They shared presentation tips and examples of other successful sessions. They were also very supportive and personable. By the time we went "live," I felt like I knew them personally although we had never met in person.

The 3-2-1 countdown before starting a presentation is always a "time stands still" moment for me. This is when I straddle between  preparation and action just before I take my step into delivery. I started my talk with a story about my first change project and went on from there. My time flew by and forty-eight minutes later I asked Andrew if there were any questions.

The participant questions were ones that I had answered in Change with Confidence. It was good to see that people were interested in what I had dealt with. They included changing priorities during a change project, dealing with resistance, and avoiding slipping back into old ways of working. This part of the session was the most dynamic and enjoyable.

Attendees were invited to leave a comment on my website if they wanted a copy of my slides. Over seventy-five people left comments and received my Powerpoint slide deck. I thought about  sending a PDF file of my slides but my goal was to help people delivering change, not to protect my work. I hope they use my slides in their change presentations. 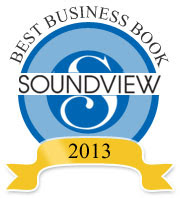 A couple of weeks before my presentation, I got the great news that Soundview had awarded "30 Best Business Books of 2013" status to Change with Confidence. This means they will write an Executive Book Summary and record a twenty-minute audio version of it. They will also record an author interview that will be distributed to all members. I couldn't be more thrilled.

Phil
Posted by Phil Buckley at 18:18 No comments:

What Got You Here Won't Get You There

I am really enjoying presenting at conferences. Attendees are interested in my topics and are willing participants in dialogues. They also have a host of good and bad experiences around change that adds flavour and relevance to the sessions.

Beyond the thrill of presenting, I have the opportunity to learn from other presenters. I was keen to see Marshall Goldsmith open the HRANS conference a week ago. He was voted the #1 leadership thinker and #7 business thinker in the world at the Thinkers 50 ceremony sponsored by the Harvard Business Review. He is also a million-selling author and editor of 31 books. His list of accomplishment is massive.

Marshall was sharing concepts from his latest book, What Got You Here Won't Get You There. I like the title, which reminds me of the saying, "If you keep doing the same things you will get the same results"; you need new thinking, actions and behaviours to get to the next level.


I sat up front to get the most out of his talk. Marshall was a fun speaker. He said that he is a Buddhist and gives everything away that he creates on his website. Marshall explained, "We all will be equally dead, so might as well. The world becomes a better place because of what we do." I liked him before he started speaking on his topic.

Here is what I learned from his presentation style:

After Marshall's talk, I approached him and thanked him for his advice. I asked him if anyone had come up to him after a talk to offer their help to him with no strings attached. Marshall said he would have to think about that but he didn't think so. That was my one idea from his session and I am now sending him an email with my offer of help. No strings attached.

Posted by Phil Buckley at 08:54 No comments:

Email ThisBlogThis!Share to TwitterShare to FacebookShare to Pinterest
Labels: change, change management, change with confidence, Marshall Goldsmith, presentation style, What Got You Here Won't Get You There

Everyone has a fifth gear. When does yours kick in?

I realized I had a fifth gear in 1987 when I took three months off to travel Europe. It had been four years since graduating and I felt I wasn't achieving my life goals. Traveling by backpack alone was one of my goals.

I had arrived in Brindisi, Italy to board a ferry to Santorini to meet some new friends. There was one more ship leaving before the port would be closed due to a general strike. If I missed it I would miss my friends. 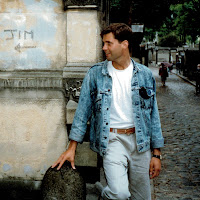 The ticket office was mayhem. I push my way (a new behaviour) to the counter and bought a ticket. With ticket in hand, I ran a half a mile with my heavy backpack to the ferry.  Exhausted, I presented my ticket to the attendant but something was wrong. My ticket hadn't been stamped. No stamp to entry. My look of horror had no effect on the situation. With a shrug the guy started unwrapping the ropes holding the boat to the dock. They were about to set sail.

I hoisted my pack on my back and bolted back to the ticket station. It was blistering hot and humid and I was wearing a jean jacket. I was drenched. I ran up to the counter (most people were now on the boat) and waved my arms wildly in large "stamp my ticket now" motions. My look of horror didn't speed up the process.

When I finally got my stamp I dashed out the door, more hunched than when I arrived. I had no energy left and there was a moment when stopping seemed like the only option. Suddenly,  my pace quickened. I was just as tired but energy surged through my body.

When I got to the boat it was inching away from the dock. The same guy that had sent me away was on board shaking his head. I flung my pack through the air onto the deck. I then took a running jump and fell onto the deck. The guy started screaming but it was too late to eject me. I had made it.  It was great to see my friends. 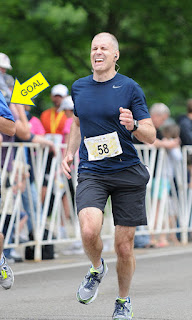 Since then, I have used my fifth gear many times, both personally and professionally. It can take the form of operating on little sleep  or attempting something I have never done before.

I also use my fifth gear in the same way that I found it: through running. No matter how tired I am in races I always bolt to the finish. In the last 400 metres, I will select a fellow runner to pass and then speed up. It's never let me down and usually I pass my mark unless his fifth gear is faster than mine.

My fifth gear kicks in when the odds are steep and my resources are low. The trigger could be the realization that I need help, the thrill of the adventure, or the need to test that it's still there. Whatever the motivation,it has always been there when I need it. It doesn't always lead to success but it has made me more successful. That's what counts.

Phil
Posted by Phil Buckley at 08:52 No comments: