Last weekend, I read an article about a book with an interesting premise: To capture everything a friend knows. To do this, she invited this friend over for coffee a couple of times a week. "He would start talking and she would start typing." The outcome of these meetings is their book, "The Chairs Are Where the People Go." 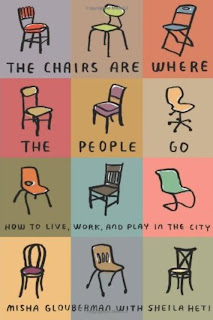 I was curious about what Misha knew and how Sheila had transcribed it. Fortunately, they were having a book launch event at a downtown bar on Wednesday night. I had never been to a book launch before and saw this as a great opportunity to do some research.

When I arrived at The Garrison, there were about 15 people dispersed in the front bar. I could see that there was an adjoining larger space with a second bar and microphones set up on a stage. I also saw a table with stacks of books on it - I was at the right place. Being in a bar alone is no fun so I quickly went to the table and bought a copy of the book.

The cover was as fun as the title. As John Bradley said in an earlier post, "The cover and title is 80% of it." The table of contents was even more intriguing.The 72 chapters were eclectic, ranging from topics like "Everyone's Favorite Things and Unfavorite Things are Different" to "Failure and Games." They made me want to read them. Being in a bar alone made me want to read them immediately, so I did.

Luckily, I saw one of the two authors as he walked by. I said hi, shook his hand and congratulated him on their book. Misha was friendly and humble. We talked about his life since the book came out and the promotional tour they had almost completed. I didn't say that I was writing a book, and I later questioned why I hadn't. I think I am a little shy about my writing adventure until a publisher takes a chance on what I have written. I will work on this.


About an hour later (fortunately, I had something to read), Misha, Sheila and a moderator friend, Carl, walked onto the stage. The crowd had now grown from 15 to over 100. Sheila read her foreword and Misha read a chapter of the book. Then Carl asked a few questions followed by questions from the audience. The mood was upbeat and all three speakers were very funny.

The book signing followed, at a second table beside the one with their books. It felt strange waiting in line to have the authors sign my book. I didn't know them and had only read a few pages of the book (bar lighting is terrible for reading). However, I was on assignment and wanted to experience the whole event. When I got to the front, I saw two friends having fun, signing their names to something they created together. It felt good to see them up close and happy. Maybe that will be me some day. ﻿﻿

So, what did I learn? I jotted down some thoughts while waiting for the launch to begin:﻿﻿


- Launching a book is a celebration
- Always arrive early if you want to speak at length with presenters
- You only need one publisher to say yes
- An interesting book needs a hook - something to draw people in
- Humour makes books more interesting
- When an opportunity appears, take it without second thoughts
- It's not so bad attending an event alone when you have something to read

The assignment was a success and now it's time to get back to my writing. Tonight before I go to bed I am going to read chapter six: "Don't Pretend There is No Leader." The assignment continues.