Why Every Leader Needs the Charisma Factor

In the late 90s, I read The Charisma Factor by Robert Richardson and Katherine Thayer. It decoded how famous charismatic leaders motivate people to follow them and devote themselves to achieving their goals.

The authors define charisma as the "ability to touch the hearts and minds of those around you to move them into action." Charismatic leaders "create the enthusiasm, excitement, and motivation others need to jump into the game and begin playing at their best."

At the time, charismatic leaders dominated business headlines. Jack Welsh was declared "Manager of the Century" by Fortune Magazine and Steve Jobs, after rejoining Apple, passionately described market dominance as "ours to lose." Legions of aspiring leaders consumed self-help books to helped them emulate their heroes.

Since then, charismatic leadership has been challenged. Daniel Goleman has written about the dark side of charisma where a leader's 'charismatic authority' inspires people to passively do the wrong things. Chris Bones' book, "Cult of a Leader," has drawn parallels to broader cultural themes of celebrity infatuation and consumerism "that imbue leaders with powers over and above those of ordinary mortals." Also, Tracey White's blog about followership has questioned the individual leader's ability to solve many of today's complex challenges. Lone wolf charismatic leaders have lost their shine.

Charisma still plays an important role in leading change. This is especially true for empowering cultures where everyone is viewed as a leader, regardless of rank or role. The charisma factor helps communicate the importance of people's work. It also motivates others to devote themselves to efforts beyond their job responsibilities. These contributions help break down organizational silos and build greater awareness of how business areas are dependent on each other. Also, with greater collaboration comes greater recognition of people's work, creating a virtuous cycle of contribution and reward.

Here are highlights from Richardson's and Thayer's research on how to be charismatic: 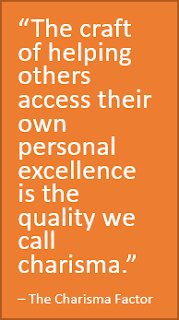 Most organizations are overloaded by the number of changes it must make to stay relevant and successful. A leader's ability to motivate and focus people is an important skill to provide direction and inspire action. Leveraging the power of charisma is one way to incite people to "jump into this game and play at their best."